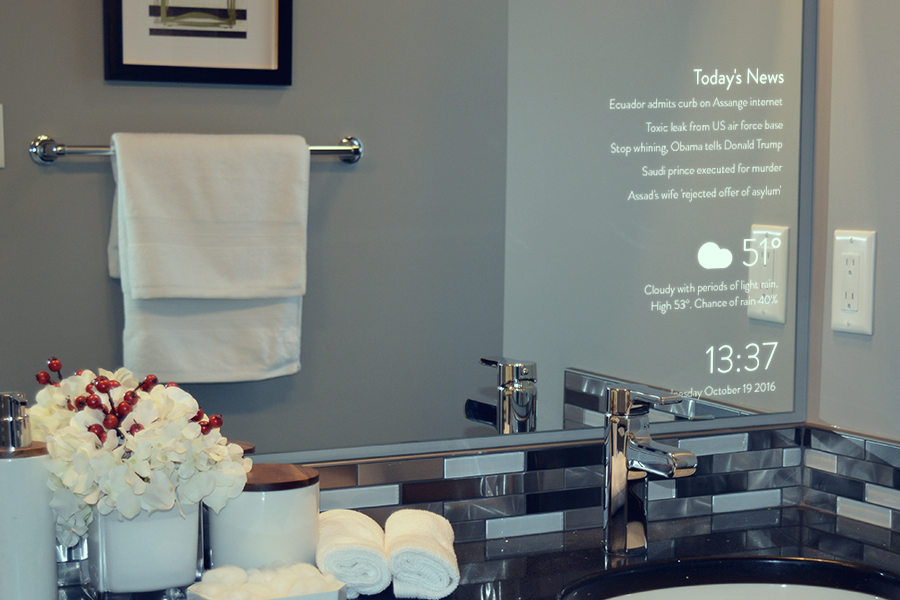 Since the dawn of time, mankind has been making improvements for virtually all aspects of life. We learned how to control and manipulate fire, we invented the wheel, we crossed the vast oceans. These days those times of old fashioned pioneering has long since passed, and we’re looking ever increasingly inwards for expansion and innovation.

With the invention of Smart Reflection, a smart mirror, we are asked to take a look at ourselves, but at the same time, do so with the added augmented reality that the so called intelligent mirror provides.

Smart Reflection offers it users the capability to receive everything from the weather report, to Facebook status updates directly displayed on the mirror, all while having your own image reflected back at you, making it possible to both shave and look at funny cat pictures.

Developed by an app development agency for internal uses, they quickly realized the potential for the mirror as a commercial product, and have as such shifted their focus to incorporate tech users of all ages and levels of proficiency.

Designed to be running on very little power consumption, (the Raspberry Pi 3B uses ~2.5Watts on full load,) the mirror could potentially run 24/7, collecting data used for other household sensors such as thermostats, window actuators and power supplies.

While most of the available input and outputs on the single Raspberry Pi will be used for the mirror, it will be relatively easy to add another unit in series to the aforementioned one, thus making it possible to connect every IoT device in the household together, meaning that the normal bathroom routine can be excellent time for micromanaging the kids electricity usage for instance.

Coupled together with the Raspberry Pi will be a standard PC monitor, placed upon a two-way mirror allowing for the users to see their own reflection at the same time as seeing data displayed on the mirror, just as if it was the monitor itself.

While we foresee certain problems with shaving and watching last night’s basketball highlights, the concept is interesting, and provides unique use cases not previously considered as far as we know.

Smart Reflection is not the first digital mirror however. There have been a few failed attempts on Kickstarter, and various amateurs have built their own private version for home-use.

Nodes aims to change all this by creating a modular-based intelligent mirror with open-source software and hardware anyone can afford and purchase around the world.

“We loved the prototype that we built for our own personal use so much that we decided to go ahead and try to make it modular and more easily buildable. By combining our extensive knowledge of mobile enterprise application development with our employees love of all things tech, we’re currently in the late design stages of Smart Reflection which we hope people will love as much as we do.”

There are still certain features still to be addressed and programmed for. This includes how to navigate menus and handle user inputs in general, since the prototype used special licensed software that Nodes still want to keep closed.

Since the hardware is based around the Raspberry Pi 3, it will be possible to add a mouse and keyboard to the mirror, although that would sort of defeat the purpose.

More likely we will see voice recognition at some level, possibly based on a hard-coded list of accepted keywords (Think: OK, Google). Alternatively it could be controlled by the 3D Sensor and Gesture Recognition like we know from the Xbox and their Kinetic hardware.

The developers are currently open for user submitted ideas as to the functionality of both hardware and software, so if you have an exciting idea you are sure will become the next big thing in intelligent mirrors, go ahead and post in on their blog – you might even win a first edition Smart Reflection mirror!

15 Must Have WordPress Plugins for All Sites in 2018