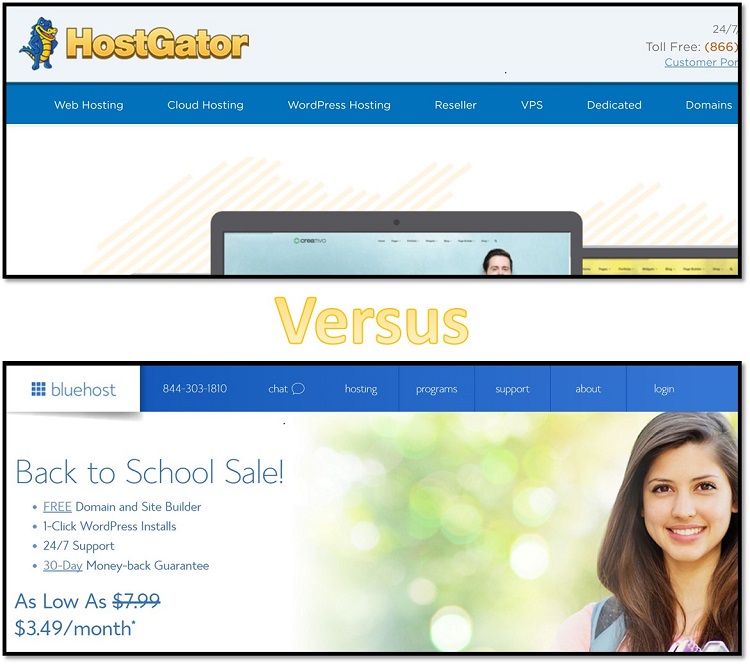 Web hosting is primarily the place where a blog or a website stays on the internet. Before tackling the question “between HostGator and BlueHost, which one is the best?” it is important we first understand why professional web hosting is necessary yet there are so many free web hosting programs.

Choosing the right professional web hosting service provider from a bunch of them could be a big challenge. DreamHost, BlueHost and HostGator are the top three most recommended companies.

Below is BlueHost Vs HostGator comparison.

These two are the best and also the most recommended companies for web hosting due to their performances. Both BlueHost and HostGator give uptime guarantee up to 99.9%.

HostGator websites are hosted on high-quality Dual Xeon servers at their centers located in Dallas. These Data Centers are properly equipped and linked to ten backbone providers.

BlueHost utilizes CPU separation technology which can efficiently control CPU and keep your site safe from bad users. Additionally, HostGator spends a lot of money yearly in technology to improve on their performances.

Website downtime is a bad experience for web visitors. As mentioned earlier, BlueHost and HostGator provide 99.9% uptime guarantee. However, monitoring results from two websites one hosted by HostGator and the other one hosted by BlueHost show that in one minute, HostGator had only one outage in seven days, while in a total of 51 minutes, BlueHost had experienced 11 outages.

Test results on the time both web hosters took to respond shows that, it took 1.2 seconds to load for a website hosted on HostGator and 5.4 seconds for a BlueHost hosted site.

Having a great team of support staff is essential for web hosting companies. When your servers are faced with problems, the support staff should be able to deal with it immediately to counter site downtime.

In both HostGator and BIueHost, provide customer support around the clock. You can reach them by either creating a ticket, make a phone call or by simply using their live chat feature. Both companies also have Email support.

Both HostGator and BIueHost have a great user interface. Having a control panel which is easy to use is very crucial, especially for new users and people who have no idea how to install web scripts like Joomla and WordPress.

BlueHost and HostGator have first-rate security to their control panel to ensure your files are secure from hackers and viruses.

HostGator provides a customized control panel which is quite easy to understand. This shows that HostGator is more focused on satisfying their customers.

BIueHost has three plans known as starters, plus and business plan. HostGator on the other hand also provides three plans. Known as Hatchling Plan, Baby Plan, and Business pan. These hosting companies change their plan prices regularly. It is advisable you check on their respective sites for updated prices.

HostGator or BlueHost? My Recommendation

Based on the above comparisons, HostGator is better than BlueHost in performance.

Things To Do In Tauranga

Why Use Third Party Logistics?

Reasons Why Online Marketing Should Matter To Ottawa Entrepreneurs

Digital vs. Traditional Marketing: Which is the Best Way to Market Your Business?